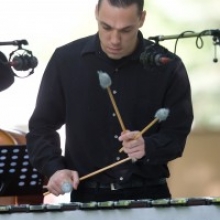 Passionate about jazz music since his teenage years, François studied classical percussion at CEGEP Marie-Victorin with Julien Gregoire (Nouvel Ensemble Moderne, Sixtrum) in 1997 before deciding to focus on jazz. To do so, he completed his Bachelor’s of Music in Jazz Performance at McGill University in 2005. Among the teachers that have influenced him during his formative years are Art Roberts, D’Arcy Philip Gray, Greg Amirault, Rémi Bolduc, Greg Clayton and André White. After his study at McGill, François also studied privately with vibraphonist Don Thompson thanks to the support of the Conseil des Arts et Lettres du Quebec.

His approach to vibraphone has been influenced by Milt Jackson and Bobby Hutcherson but also includes adoption of more recent four mallet techniques. He is active as a professional on the Montreal music scene, having performed with singer Dorothy Berryman, with pianist Andre White and with his own quartet. In 2012, François participated in the recording of the album All The Way (Album of the year – Jazz Interpretation, ADISQ 2012) with singer Susie Arioli. He also holds a Bachelor’s in Education from the University of Ottawa (2009). In addition to teaching jazz vibraphone at McGill University and Concordia University, he teaches music in the Commission Scolaire des Patriotes school system.