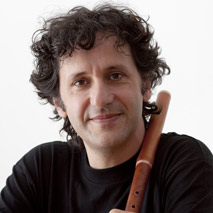 Specializing in Baroque flute, Grégoire Jeay frequently performs in Quebec and Canada and has also played in France, Belgium, Mexico, Turkey, the UK, and the US. He is recognized for his musicality and expressiveness, as well as for his great skills in ornamentation and improvisation. His virtuosity on the transverse flute is paralleled only by his abilities on the recorder and various flutes from around the world. Indeed, in addition to baroque music, he is interested in a variety of musical styles such as medieval, Irish, Arab-Andalusian, Sephardic, and has participated in several concerts and recordings with some of these specialized music ensembles.
Jeay is a member of several prominent early music ensembles, with which he regularly performs and records, including Tafelmusik of Toronto, Clavecin en Concert, Les Idées heureuses, Theatre of Early Music, Les Voix humaines, Les Boréades, Ensemble Caprice, La Mandragore, Constantinople, and La Nef.