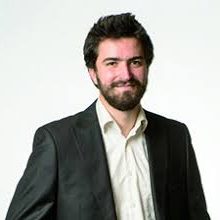 Winner of the Standard Life Grand Prize in the 2009 MSO Competition, Hubert Tanguay-Labrosse began his music studies through the vocational music programmes at the Plateau and Joseph-François-Perreault Schools.  A graduate of the Juilliard School (clarinet, class of Charles Neidich) and of the Conservatoire de musique de Montréal (conducting, class of Raffi Armenian), he is now best known as soloist with many Canadian ensembles, including the Montreal, Sherbrooke, Longueuil, and Newfoundland Symphony Orchestras.  We have also heard him perform on Radio-Canada.

In 2003, in collaboration with friends and colleagues, Hubert formed BOP, a production company dedicated to the production of ballets, operas and pantomimes, where he holds the posts of artistic and musical co-director.  Since 2015, he has also been the artistic director and conductor of the Orchestre symphonique des jeunes de Sherbrooke and the Orchestre symphonique des jeunes de Joliette.

Hubert spent Thanksgiving 2016 at CAMMAC as a monitor for the children’s programme, and has been the Chef du camp at the Camp Musical Père Lindsay in Lanaudière since November 2017.