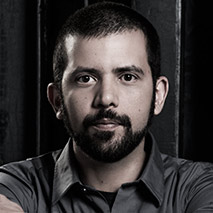 “There is an ethical side to being a musician. The generosity that is necessary to be truly present on stage, it must be cultivated in everyday life.”

Catalão took his first steps in music with the violin at the age of seven. But it was his passion for hardcore music that led him to the drums as a teenager. One summer night, he shaved off his long hair and decided to devote himself to percussion, an epiphany he owes to his teacher, Ney Rosauro. He studies with Rosauro in Santa Maria, Brazil, before continuing his apprenticeship in Strasbourg with Emmanuel Séjourné, then in Montreal with Robert Leroux.

While refining his skills as a performer, he became involved in experimental projects. His work has earned him awards at the Percussive Arts Society Composition Competition and the Salvador Symphony Orchestra Young Soloists Competition.

Catalão is a member of the K-TZ Percussion Quartet, which is as much involved in contemporary music as it is in theatre. He is also the founder of the Linea ensemble and plays in the improvised electroacoustic music group [IKS]. Improvisation is an important part of his approach, as it is a way for him to acquire a true intimacy with his instrument, allowing him keep in touch with the more instinctive side of a musician’s work.

Catalão is also interested in how theatrical approaches, such as Stanislavski’s, can be applied to music. His goal is to inhabit every gesture he makes when he is on stage, and to always be committed to the works he performs, so as to touch the audience. “I would like Sixtrum to go beyond being just a band to become an open institution, sharing knowledge and serving the cause of percussion.”