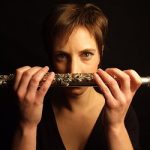 Pascale Margely graduated from the Conservatoire de musique du Québec à Gatineau and is very active in the music life of the Outaouais region. She has been appointed professor of flute at the Conservatoire since 1997 and at L’École de musique de l’Outaouais since 1993. As a freelance performer, she played for the Productions Lyriques de Gatineau, Espace musique, Concerts Ponticello, les Plaisirs du Clavecin, Ensemble Prisme. She also organized her own chamber music concerts with various groups.

Pascale Margely has a keen interest in contemporary Canadian music. She performed many important works from the Canadian repertoire and since 1995 has been collaborating with Canadian composer Jan Järvlepp for the premier of a few of his works, such as Concerto 2000 in November 2000 with the Orchestre du Conservatoire de musique du Québec à Gatineau (with the support of the Canada Council for the Arts), and the Double concerto for flute and English horn with l’Orchestre Symphonique de Gatineau in 2009. In 2002, she received an arts scholarship from the Conseil des Arts et des lettres du Québec, thanks to which she attended a seminar with flutist Roberto Fabbriciani at the Mozarteum University of Music and the Performing Arts in Salzburg, Austria.

Since its creation in May 2007, she is the personnel manager and solo flute of l’Orchestre Symphonique de Gatineau. She is also member of the Vice Versa duet, with guitarist Julien Bisaillon, and a member of Bel Canto Wind Quintet.