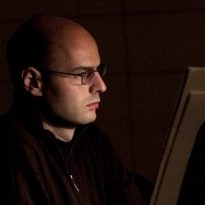 Robert Rival was the Edmonton Symphony Orchestra’s Resident Composer from 2011-2014. His music, written in a contemporary extended tonal style and inspired by the Canadian wilderness, literature, and classical and romantic musical forms, has been described as “stirring and dramatic”, “spectacular”, “clever and evocative”, “well crafted”, “immediately appealing”, “melodic and accessible”, “memorable”, “sophisticated”—and his song cycle, Red Moon & Other Songs of War, as “an unequivocal hit”. His orchestral works, programmed regularly across Canada, include Lullaby, for the ESO’s Carnegie Hall debut—lauded as an “atmospheric dream world” and “a work of quiet rapture and refined sensibility”; the muscular Achilles & Scamander; the dazzling Whirlwind; Northwest Passage Variations on the Stan Rogers tune; the Renaissance-inspired Delights & Discords for chorus and wind ensemble; and the sweeping Symphony No. 2 “Water” whose textures and rhythms were suggested by the ocean and rainforest. His diverse catalogue of chamber music is widely performed. Co-editor of a book on Malcolm Forsyth, Rival is also active as a scholar. He holds a doctorate in composition from the University of Toronto, teaches at the University of Ottawa and lives with his wife, Chantal-Andrée Samson, a realist oil painter, and their son.