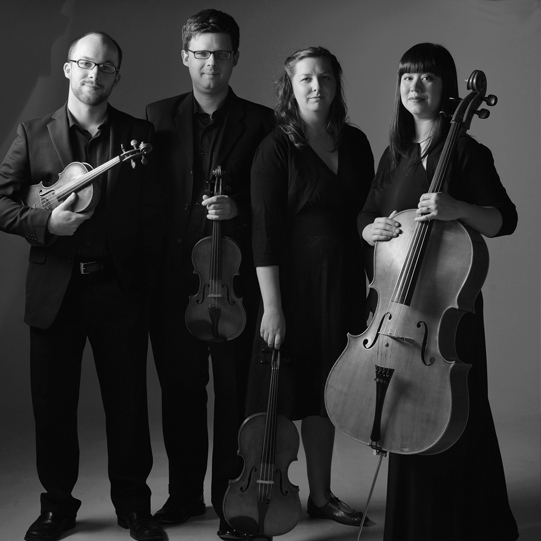 Named after the trees inhabiting the area around their homes, the Silver Birch String Quartet is one of Canada’s most exciting and innovative young quartets, earning the admiration of audiences and critics for their vibrant performances. Recently appointed String Quartet-in-Residence at Laurentian University in Sudbury, their extensive performing and educational activities have taken them across North America, including performances and masterclasses at QuartetFest at Wilfrid Laurier University, the Kitchener-Waterloo Chamber Music Society, 5-Penny New Music Concerts, the Ottawa International Jazz Festival, The Banff Centre, the Stanford University Summer Chamber Music Festival, Music by the Sea, and Colours of Music. The quartet has collaborated in concert with many of Canada’s finest chamber musicians, including octets with the Penderecki String Quartet, quintets with pianist Peter Longworth, accordionist Joseph Petric, and ‘cellist Simon Fryer. Strongly committed to Canadian music of our time, the quartet’s extensive repertoire includes music by numerous contemporary Canadian composers,both established and emerging. The SBSQ prides itself on its innovative programming, presenting interdisciplinary concerts bridging the gap between traditional classical chamber music and other genres in an effort to introduce new audiences to the world of chamber music. Past projects include tango collaborations with Quartetto Gelato accordionist Alexander Sevastian, as well as narration projects involving the Sudbury Theatre Centre and Pandora Topp. The quartet’s long association with Montreal-based jazz pianist John Roney resulted in their first album “SILVERBIRCH” on Montreal’s Effendi record label, which earned critical acclaim including a 5-star review in both the Montreal Gazette and the Vancouver Sun, praising the album’s “…transcendent ease” and “…joyous and energetic” performances, as well as a 2010 JUNO nomination, and 2 Félix Awards in the province of Quebec. The album was also named one of the Top 10 Albums of the year by the Montreal Gazette, and has received frequent airplay on CBC Radio 2 and Espace Musique.