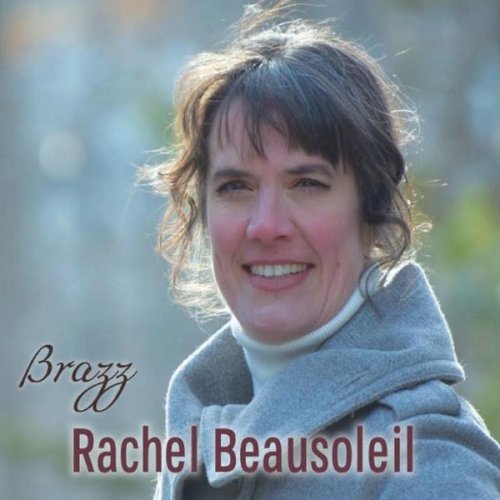 In September, Ottawa-based singer Rachel Beausoleil celebrated her birthday with the launch on her new CD Brazz. In duo, trio and quintet formation, Rachel performs classics from the Brazilian popular music repertoire.

“I have steeped myself in the vast ocean of music that is Brazil, and I am inviting the listener on a brief musical journey with me.” says Rachel.  “It was so much fun to record Carmen Miranda’s Tico Tico no fubá. Initially arranged for our live shows, it quickly became an audience favourite, so we recorded it. It is fun to play and sing all the leaps in such a fast tempo.”

Brazz was primarily recorded in Ontario at Morning Anthem Studios, by Normand Glaude. Normand did all the mixing and mastering, including the addition of Gracelli’s parts, that were recorded in São Paulo, Brazil.

Rosa Passos describes Rachel’s voice as having a “beautiful timbre”.  She goes in to say [Rachel’s] vibrato, is used with discretion and at the right moment, without too much exaggeration.”

Rachel’s vocal style has also been described as “soaring and silky,” “intense,” “vivacious,” and “dramatic.”

“You can take the girl out of Montreal … but you can’t take Montreal’s cosmopolitan culture out of the girl. I’ve developed a love of musics from all around the world because of it. Every sound I hear becomes part of my musical vocabulary. I feel like I was born to sing. Despite all of life’s detours, singing is always like coming home. And Brazil is the perfect fountain for me to quench my thirst for more music, and one more language to sing in while I’m at it!” – Rachel Beausoleil

Rachel Beausoleil is a French-Canadian worldly jazz chanteuse, known for her love of languages, world musics and her on-stage drama flair.  She performs in 6 different languages.  Since the late 1980s, Rachel has been part of many vocal groups, jazz and Latin combos and has performed in both North and South America.  She’s been trained by jazz legends such as Rosa Passos, JUNO winner Jeri Brown, and classical bass-baritone Ingemar Korjus.

Rachel has been teaching at CAMMAC for several years, and she is offering several classes online this November:

MASTERCLASS: Interpretation And Improvisation, For Jazz And Beyond – Friday November 6, 5 p.m.

For all the details and to register for Rachel’s classes: CLICK HERE

To find our more about Rachel, please visit her website: www.rachelbeausoleil.ca