Every year CAMMAC’s Ottawa-Gatineau Chapter invites the public to participate in a performance of the great ‘Messiah’ oratorio by G.F. Handel. The event, which has become known under the name ‘Come Sing Messiah’, takes place on the first Friday in December. It always draws a capacity crowd of over 600 singers and an audience of 300. The people singing in the choir are supported by professional musicians making up the rest of the cast, i.e., the orchestra musicians, the organist, soloists and the conductor. Over its long history this concert has become an important part of the community’s Christmas season. 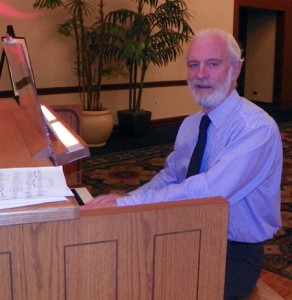 Preparations for the concert include three rehearsals for the singers. The rehearsals are optional and take place on the three Saturdays preceding the main event. They give singers the opportunity to learn or re-learn the 14 or so choruses that are chosen for that year’s performance.

The year 2012 marked both the 36th public performance of ‘Come Sing Messiah’ in Ottawa and the 25th anniversary of CAMMAC’s role in producing the event. A video of the 2011 performance of the Hallelujah chorus is here.

‘Come Sing Messiah’ is performed every year on the first Friday in December at Carleton Dominion-Chalmers Centre, O’Connor at Cooper in Ottawa (directions are here). The concert starts at 8pm, with the afternoon of that day dedicated to rehearsals for the soloists. Preparations conclude with the all-important rehearsal for the 600-voice choir with orchestra from 6pm to 7:30pm.

Optional chorus rehearsals are held at Parkdale United Church, 429 Parkdale Avenue in Ottawa (directions are here) on the three Saturdays preceding the event. They start at 10:00am and end at noon. Rehearsal tickets will be sold at the door, with people indicating the date or dates they wish to attend (1, 2, or 3 rehearsals) and purchasing the required tickets at the price in question..

Information about the current year’s event is always available on our activities page in early September.

Full information about ‘Come Sing Messiah’ can be found through our “Frequently Asked Questions”.

In celebration of the 25th anniversary of the ‘Come Sing Messiah’ event, CAMMAC Ottawa-Gatineau commissioned Burman Productions to produce a videorecording of the 2012 performance. You can watch this performance on YouTube.

The idea was the brainchild of Professor John Churchill, head of the (then) new Department of Music at Carleton University. The first public performance took place on December 2nd, 1977 at the Glebe Community Centre, when people from the Ottawa region and as far away as Brockville and Cornwall arrived to become “Il Coro Magnifico”.  The Carleton Chamber Players formed the orchestra, with Jean Trevelyan, John Churchill’s wife at the organ plus 3 soloists, all under the charismatic leadership of John Churchill.

‘Come Sing Messiah’ was a success from the beginning, attracting large crowds to the Glebe Community Centre. After Professor Churchill retired, the baton was passed to Professor Piper of Carleton University with the Divertimento Orchestra providing the accompaniment. In 1988 CAMMAC Ottawa-Gatineau took over the organization of the event and from 1988 to 1990 Gordon Slater (Dominion Carillonneur and conductor of the Divertimento Orchestra) was the conductor.

‘Come Sing Messiah’ continued to grow such that it was necessary to move to what was then Dominion-Chalmers United Church in 1991, because of its greater seating capacity and excellent organ. Louis Lavigueur from Montreal, who was well known to CAMMAC as a dynamic leader, was invited to conduct in 1991, with Karen Holmes accompanying at the organ. From 1992 to the present, ‘Come Sing Messiah’ has continued to be held at the same location and with principally the same performers: 750 choristers plus four soloists, accompanied by a small professional chamber orchestra with Kevin James as concertmaster and Alan Thomas as organist. In 2019 Carleton University acquired the building and proceeded with changes to the interior, primarily an enlargement of the stage and consequently a reduction in the seating capacity and with it the size of the choir. The same year also saw the retirement of our organist of close to 30 years. What has remained, however, is the enthusiasm of the choristers and their 300-strong audience, who every year look forward to their participation in the performance of this beloved work.