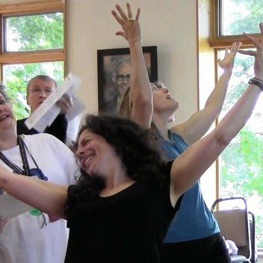 Elissa has been training actors, speakers, singers and dancers for the past 20 years. Originally trained in sciences and as a lawyer, Elissa decided to follow her passion for the performing arts.

For the past 19 years, Elissa has brought her popular Broadway course to CAMMAC (Canadian Amateur Musicians/Musiciens Amateurs Canadiens).

Elissa also trains speakers around the world, in industry and the non profit sector. In 2010, she coached 50 young environmental entrepreneurs at the YES conference in Sweden. She has taught people in Europe, Asia, Australia, India as well as in North America. Since May 2012, she and Steve Lecky have been the speaker trainers for the Sauve Foundation’s elite international scholar program.

Elissa is an actor and singer who has performed in many plays, musical theatre productions and films over the past 30 years. She has also lent her voice to various radio and television projects, including the cartoon Arthur. She also performs as a classical singer.